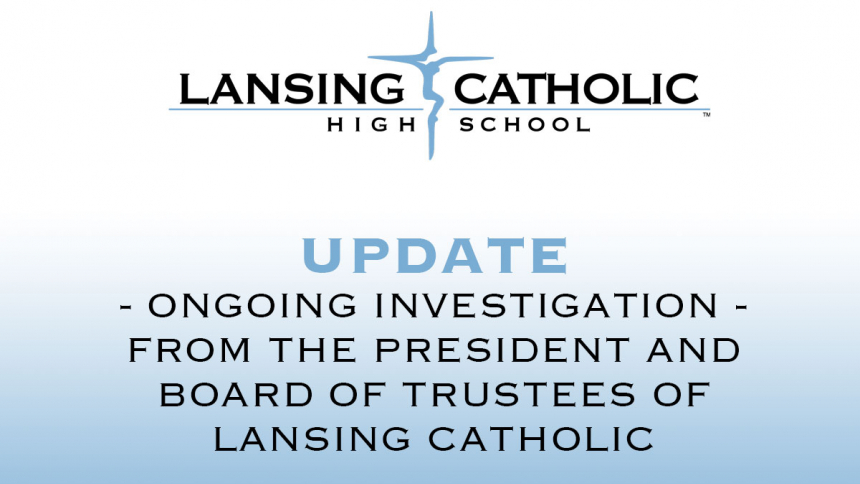 This morning, the Lansing Catholic High School Facebook page had an image posted from an old yearbook.  We have learned that our early information about the photo was incorrect. The photo is from a 1979 yearbook and the event was a Halloween assembly in "Animal House" style. In the picture someone is wearing what any reasonable person would assume is the garb of the KKK, an overtly racist organization that has and continues to sow hatred throughout America.  Disappointment does not fully capture the feeling of frustration that this picture was permitted to even be in a yearbook, and we condemn the fact that it was ever allowed at a Catholic school.

This picture is also a physical representation that serves as a visual reminder of the pain and experiences that some students, alumni, and families have experienced within the walls of Lansing Catholic High School.  We apologize that this was allowed within our walls as a costume, and even worse allowed in a yearbook representing our school. We also apologize for the emotions and pain that this has stirred up within our community by being posted to our Facebook page.

We understand how this picture resurfacing in 2021 contributes to a narrative of a controversial and painful history regarding race relations with our school.  The context of this post within that larger narrative demonstrates that we need to make a concerted effort to do better and be better as a community.  We are committed to not letting this sit as performative empty rhetoric.  It needs to be supported by measurable actions that demonstrate a commitment to our mission statement of forming students spiritually, intellectually, and socially into faithful disciples of Jesus Christ.

As we continue our investigation into how such a reprehensible thing happened, we will continue to update you in our community. We commit to the transparency of our diversity efforts and processes and aim to maintain integrity and expect accountability with all efforts.

This morning at approximately 10am, the social media manager for Lansing Catholic High issued a post on the school’s Facebook and Instagram accounts depicting, I am informed, the Class of 1979 taking part in a theatrical production set in Ancient Rome.

The photograph clearly shows students making the Roman salute which was later adopted in the 20th century by both fascist Italy and Nazi Germany. It also seems to depict a student dressed in the garb of the notoriously racist and anti-Catholic organization, the Ku Klux Klan.

As soon as the senior management of the school saw the social media post we had it taken down immediately, we also placed our social media manager on administrative leave and launched an investigation in to how this dreadful lapse of judgement could ever occur.

I am very angry and very sorry that this ever happened, it was wrong, offensive, and does not, in any way, reflect who we are as a school community.